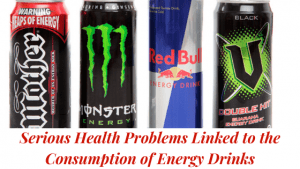 Energy drinks are widely promoted as products that increase energy and enhance mental alertness and physical performance. Next to multivitamins, energy drinks are the most popular dietary supplement consumed by Australian teens and young adults. Men between the ages of 18 and 34 years consume the most energy drinks, and almost one-third of teens between 12 and 17 years drink them regularly. The Dangers of Energy Drinks should not be ignored as they are a lethal weapon when it comes to damaging your health. Taking a deeper look as to how these drinks will harm your health.

“Serious Health Risks” have been linked to the Consumption of Energy Drinks
Such as Red Bull, Monster, Mother & V

“Red Bull may give you Wings:
But at what Cost?”

Many of you have understood the danger hidden behind these Toxic elixirs.
However for some you may be unaware and think of them as magic potions for energy and vitality.
The truth about how they affect your body is very Dangerous, Life threatening and to some even Deadly.
It is a known fact that when these supposed energy drinks are consumed on a regular basis and long term that significant health problems will eventuate.
RED BULL was created to stimulate the brains in people who are subjected to Great Physical Force and in “Stress Coma”

Danger: You are being Subliminally Programmed with Slogan such as:

Their logos are targeted at young people and sports people, two major areas of our community that are easily transformed to believe and want access to anything that will give them supposedly added energy and endurance. What makes these drinks Dangerous is the excessive quantities of B Vitamins, caffeine, taurine, sugar and sugar substitutes.  Whilst relatively safe when prescribed by a Naturopath or Herbal professional herbs used in these drinks such as Ginseng, Ginkgo Biloba, and Guarana become dangerous when combined with caffeine and sugar.

Further Research has identified the “Hidden Truth” associated with these drinks, in FRANCE and DENMARK these drinks have been prohibited being founded as the hidden “Cocktail of death”

What’s In this Cocktail of Death

This is due to its components being mixed with GLUCURONOLACTONE’, a highly dangerous chemical, which was developed by the United States Department of Defense during 60 years to stimulate the moral of the troops based in VIETNAM, which acted like a hallucinogenic drug that calmed the stress of the war.
But their effects in the organism were so devastating, that it was discontinued, because of the high index of cases of migraines, cerebral tumours and diseases of the liver that was evident in the soldiers who consumed it. In spite of this, for example a can of RED BULL you will still find the components: GLUCURONOLACTONE, categorized medically as a stimulant: But what it does not say on the can of RED BULL, are the consequences of its consumption, and that has forced us to place a series of -WARNINGS:

1. It is dangerous to take it if you do not engage in physical exercise afterwards, since its energizing function accelerates the heart rate and can cause a sudden attack.

2. You run the risk of undergoing a cerebral haemorrhage, because RED BULL contains components that dilute the blood so that the heart utilizes less energy to pump the blood, and thus be able to deliver physical force with less effort being exerted.

3. It is prohibited to mix RED BULL with alcohol, because the mixture turns the drink into a “Deadly Bomb” that attacks the liver directly, causing the affected area never to regenerate anymore.

4. One of the main components of RED BULL is the B12 vitamin, used in medicine to recover patients who are in a coma; from here the hypertension and the state of excitement which is experienced after taking it, as if you were in a drunken state.

5. The regular consumption of RED BULL triggers off symptoms in the form of a series of irreversible nervous and neuronal diseases.

IN CONCLUSION: This drink and other examples should be prohibited throughout the world,  when mixed with alcohol a time bomb is created for the human body, mainly between innocent adolescents and adults with little experience.

Considered to be one of the most influential figures in the history of medicine and healing, Hippocrates was ahead of his time when, around the year 400 B.C, he advised people to prevent and treat diseases first and foremost by eating a nutrient-dense diet based on Fresh, Whole foods. The foods that you eat each day play a critical role in controlling inflammation levels, balancing blood sugar, regulating cardiovascular health (including blood pressure and cholesterol levels), helping the digestive organs to process and eliminate waste, and much, much more. Did you know that certain anti-inflammatory foods even contain powerful active ingredients that help control how your genes are expressed?

Read Next: Steps to Avoid the Toxic Overload

Learn more about the  Foods to Eat & Why together with Easy to Follow Recipes in my eBook: Eating to Live

Previous Post: « How to Boost Male Fertility Naturally: For Conception of a Healthy Baby & a Healthier YOU!
Next Post: Four Easy Steps to Improve Your Memory: By Improving Your Brain Performance! »