Taking a walk down the supermarket Isle, there is no doubt that this is a major cause of the sudden increase in disease, obesity and mental health problems. The Food Label Con and star rating has been exposed. Food labels are there to attract your attention and rather than being helpful, often are misleading. Dr Christina Pollard, of the Public Health Association of Australia has indicated that by implementing a government system may well have seemed to be a “big win”, but many compromises were made and the quantity of things like sugars, salts have not yet been tackled. Health Star ratings have been found not to be accurate as to the nutritional components, salt, sugar and other ingredients. And as they say “There is no comparison to that of the consumption of Fresh, Whole Foods as these are the Best sources of Nutrition, sugar and salt. Perfectly manufactured by “Nature”. Ignorance is not bliss when it comes to your health. In this article I share with you an honest and researched look into what is on your Supermarket shelves.

If that alone isn’t enough to make your head spin, then there are the isles of ????grocery staples (I put question marks here because the truth be known these may be grocery staples but they are not your everyday needed food staples).  The isles of soft drinks, biscuits, cereals, juices and various drinks. Not to mention lollies, chips, cakes, sauces, coffee, teas and bread. Notice that the isles with rice, pasta are quite minimal in comparison to the ?????grocery staples which in fact are the toxic and dangerous foods that should never be eaten.

Often when you go shopping it can be hectic, kids or husband/wife all trying to do the weekly shop. I am going to put it to you here that this is possible the most important thing you will do all week, bringing some of the most important decisions that you will ever make when it comes to feeding yourself and your family.

To add to further confusion there is the colouring of marketing, where products are placed on the shelves within the isles and the supposed health claims. None of this having any conception of being ethical or with your health and well being in mind.

Labels – What do they mean and are they Correct?

Food labels are there to attract your attention and rather than being helpful, often are misleading. You may be in the cereal isle and can be forgiven for thinking that a popular packaged cereal that has a four star health rating, boasting about it’s nutrient, fibre and protein value is the best one to choose for the kids, rather than a generic box of wheat biscuits or oats. That have no star rating or health claims. I am sorry to say that you are wrong.

In each isle of the supermarket the same dilemma arises. Is there a difference between RSPCA approved and Organic? Made in Australia – but has some imported ingredients. How do you find out what country these ingredients come from? What you are seeing with your food labels is both very complex and political. It involves many organisations ranging from the food industry, government regulators. These different industries have a heavy presence in our lives as well as online. Their advertisement, especially the food industry, is everywhere. They clearly do no need to use lies and deception to get more foot traffic on their site! Then you have the marketing agencies, health advocates (these once again being Government authorities) and the consumer advocacies. So when it comes to uncovering the truth, it becomes very difficult and tricky.

Health Star Ratings – The Truth behind these!

Approximately two years ago, Health Star Ratings (HSR). This is a system that was introduced specifically for Australia’s packaged food industry.

It seem to make sense to know and be able to make some sense of a standardised system of nutritional value and having a way of determining the content of these foods.

So this was to be a standardised program of awarding products between half a star and five stars for their nutritional value.

The Federal Health Department seems to believe that this system has proven successful, with 75 companies adopting the system across more than 3000 products.

Appearing to make you, the consumers decision for healthier choices easier. However these star ratings have attracted a great deal of criticism. Dr Christina Pollard, of the Public Health Association of Australia has indicated that by implementing a government system may well have seemed to be a “big win”, but many compromises were made and the quantity of things like sugars, salts have not yet been tackled.

Dr Rosemary Stanton a Leading Independent nutritionist was originally involved in the star rating process. But has dropped out of this process along with several other professional nutritionist who were on the team.

Further investigation regarding the actual nutritional content, saturated fat, sugar, salt and supposed fibre needs to be considered. As this has still too much influence by the general grocery industry.

You may well think that you are doing well choosing free range eggs. Even though you are paying more, you believe it is worth it. The word free range is quite broad in definition and doesn’t guarantee happy, free range chooks.

Choice an independent consumer group, made an investigation last year and found many free-range eggs ( including those sold under supermarket brands) had come from facilities where there were up to 10,000 chooks per hectare. This is more than six times the 1500 maximum free-range density recommended by the RSPCA and model code of practice for the Welfare of animals. Not to mention that the egg industry, free-range or not ALL kill the newborn male chicks, they are useless to them.

You may find it interesting that only a few weeks ago, the federal government approved a controversial new standard for free-range eggs that permits 10,000 chooks per hectare, with no requirement for them to go outdoors.

Organic foods are meant to be grown without the use of artificial fertilisers, chemicals and pesticides or antibiotics. This includes any other additional artificial colourings or additives. However in this area the Australian standard for growers and manufacturers wanting to label their produce as organic is voluntary and there are many varying standards within the certification. The certification is done by private organizations.

The RSPCA is well known organization for its protection of animals and has established its Approved Farming Scheme as a way of improving the lives of farm animals. This giving consumers the choice to buy pork, chicken, turkey and eggs of a higher welfare standard. This identifies with free-range (not organic). Meaning that the animals get more space and time outdoors in the fresh air.

This has only come into play since July 1st, it is designed to boost transparency over where your food is coming from. So all types of Australian symbols are used for example the kangaroo in the green triangle on display when a food is made, grown or produced in Australia. There may be statements and wording that have to clarify if the ingredients haven’t come from Australia.

This has come about because of certain foods being contaminated that were imported from China. However it is imported to note here that other countries do not have the same health and hygiene standards of that within Australia.

Personally, from buying Australia produced products you will benefit in two ways one with your health as well as a healthy future for your country, farmers and manufacturers. Giving your children and grandchildren jobs for their future. 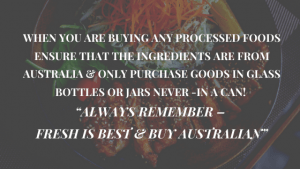 What about the Claims of Nutrition and Health Benefits?

Your food labels are just full of nutrition and health claims. These include: low carb, natural, lite, high fibre, wholegrain and vitamin enriched. Non of these are regulated. They are marketing concepts of what they believe you want to hear. An example of this is white bread. This can have a sprinkling of grains to then be able to boast that it has the benefits of “wholegrain” or “multigrain.  A bread that is being marketed as “lower carb” only needs to contain less carbohydrate than that of a regular type bread.

The terms such as “heart smart” and “extra lean” that is seen on meat and mince. These don’t have a minimum criteria and are opened to a variety of interpretations.

There is also a number of products claiming to be “gluten free”,  “dairy free” even though the product may never have had these ingredients in them. Similarly chicken may well be marketed as “Hormone Free” even though hormone supplementation has been banned in Australian poultry farming since the 1960’s.

It can be difficult you see all the time false advertising for everything from the food you eat to the products you use for cleaning, self care and so on.

The importance is to keep yourself well informed and remember that whatever the product the closer you purchase it from the grower, manufacturer the more able you will be able to trust the product.

Foods that are Safe & Good for You, with No False Claims!

Make the majority of your shopping fresh fruit and vegetables preferable to purchase from your local Fruit & Vegetable shop, your meat, chicken from the local butcher and fish from the local fresh fish supplier. The products found on the supermarket shelves is the best way to avoid this minefield of continual label deception, toxic and harmful chemicals.

Considered to be one of the most influential figures in the history of medicine and healing, Hippocrates was ahead of his time when, around the year 400 B.C, he advised people to prevent and treat diseases first and foremost by eating a nutrient-dense diet based on Fresh, Whole foods. The foods that you eat each day play a critical role in controlling inflammation levels, balancing blood sugar, regulating cardiovascular health (including blood pressure and cholesterol levels), helping the digestive organs to process and eliminate waste, and much, much more. Did you know that certain anti-inflammatory foods even contain powerful active ingredients that help control how your genes are expressed?

Read Next: Important Facts about Processed Foods! The Good & The Bad!

Learn more about the Foods to Eat & Why in my eBook: Eating to Live – Together with Yummy & Tasty Recipes

Previous Post: « Diverticulitis: The Hidden Truth & Steps to Become Well
Next Post: Anyone for Guacamole: Enjoy the Health Benefits of the Humble Avocado! »