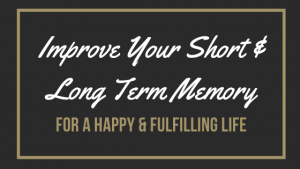 How To Improve Long & Short Term Memory 8 Guidelines for a Happy & Fulfilling Life!

It is possible by implementing some simple, yet positive changes that will support improvement with both your memory and brain function. Beginning with understanding the Difference, using mnemonics, memories as triggers, improved dietary changes and supplements.

Improve your Long & Short Term Memory by Understanding the Difference!

How to Improve Your Memory!

Our brains evolved to code and interpret complex stimuli into sophisticated models of the world we live in, so it makes sense to feed our minds as diverse a set of data as possible. Memory makes use of various “triggers,” known as mnemonics. These include: Images, Structures, Smells, Touch, Emotions, Colours, Sounds, Tastes, Positions and Language

How to make your Mnemonics Most Valuable

“No Matter What Your Age”

How to Improve Short Term Memory

For he first time, researchers have been able to watch distinct areas of the brain — the ones that relate to short-term memory — fire up after volunteers ingested the equivalent of two cups of coffee. “Everyone knows coffee makes us more alert, more vigilant, but our study documented how it works in the brain. We were able to show that caffeine modulates a higher brain function through its effects on distinct areas of the brain,” said Dr. Florian Koppelstatter, a radiology fellow at the Medical University of Innsbruck in Austria.

Many children have problems with memory. To improve your child’s memory. Playing memory games with them has been found to not only improve their memory but also their intelligence.

If you feel your child’s memory could do with some improvement, the following game steps can be a fun way to develop auditory memory. The purpose of this exercise is to increase your child’s ability to remember instructions that are given to him/her. Some children cannot remember two, three or four instructions simultaneously.

Often they will forget even single commands. Play this game often to strengthen your child’s short term memory and help them become less distracted when following commands. Start the game by telling your child about the game. The game’s object is to see how many commands the child can successfully complete.

Nutrition and How you Care for your body plays a vital role in both maintaining and improving your brain, therefore your memory for you whole life.

Read Next: How to improve and protect your Brain with the Food you Eat!

Master a Life of Optimal Health, Happiness & Vitality is in essence about is about providing you with a trusted and guided path to support you with understanding the concepts and changes necessary for taking charge of your health and ultimately your life. By Becoming a Community Member this is a Great Way to Get Started!