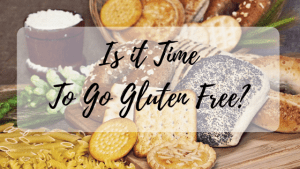 The word “Gluten” has become a topical word in the world of nutrition these days. However the big question here is – Is Gluten bad for you? Does it cause health problems?  Is it necessary to avoid it?

Gluten is a type of protein found in wheat, rye and barley. So for many people either those who have celiac disease or may not have celiac disease but have what is referred to as a non celiac sensitivity. This is where eating gluten-containing foods will adversely affect your body and your health. In times gone by most people who followed a gluten free diet, did so due to the diagnosis of celiac disease or as being gluten intolerant. With this sensitivity to gluten goes hand in hand with that of wheat as well.

It is unclear as to how common this allergy to wheat: gluten is, however it is serious . It is estimated that approximately 1 in 200 people suffer from some form of food allergy. This seems to have increased over the years. It would seem to correlate with the increase consumption of packaged and processed foods. When you have a wheat allergy, your body reacts badly to one or more of the many proteins found in wheat and other similar grains such as barley and rye. This all seems to be associated with gluten.

Symptoms can range from being mild to severe. Some of these symptoms may include skin rashes, sensitivities such as hives, stomach discomfort, irritable bowel, intestinal distress, stomach bloating and unexpected weight gain. Allergy symptoms such as Hayfever, itchy eyes, runny nose, sneezing, asthma and anaphylaxis.

Quite often if these symptoms are spasmodic celiac disease can quite often go undetected for many years. However even without eventuating to full blown celiac having a diet that is composed of a majority of gluten and wheat products has been linked to other health problems affecting your thyroid gland.

What is the Difference Between Celiac Disease and Gluten Intolerance/Sensitivity?

Celiac disease is thought to be an autoimmune disorder whereby when the person eats gluten, this prompts an immune response. The immune system then appears to attack the lining of the small intestine.  This causing damage that makes it difficult to almost impossible for your body to absorb many of the major nutrients such as iron, calcium, vitamin D and folate.

The health problems that occur long term to the nutrient deficiency caused by this disease for example are anemia, osteoporosis and infertility. Other symptoms can include as mentioned stomach pain, diarrhea, weight loss, chronic fatigue and neurological problems. The best and only known remedy for treatment of celiac disease is to totally eliminate all forms of gluten from the diet, as even small amounts can cause intestinal damage.

Some food for thought here, remembering that any disease is a sign of the body’s systems not functioning in unity together. So did this autoimmune response happen because of an overconsumption of foods containing gluten. For example a diet high in processed foods, a great deal of bread, cakes, biscuits and refined carbohydrates.

So maybe if this is the case maybe the precursor to Celiac or the warning signs are that of Gluten intolerance or sensitivity. As  Gluten sensitivity and celiac disease share many of the same symptoms. However with gluten sensitivity, the symptoms presented are gas, bloating, cramps and diarrhea or constipation soon after eating gluten. Other symptoms that can be experienced are in other areas of the body such as headaches, brain fog, (this can be associated with thyroid problems, thought to be caused by gluten), pain in your joints, muscles, sometimes associated with numbness and tingling in your legs, arms, hands or feet. With Gluten sensitivity there does not appear to be damage to the intestines as such.

Think of gluten as a glue-like substance that gives wheat and other products their chewy structure.

Although the science is much more complex than the definition, gluten can be defined, in lay terms, as the sticky protein substance in wheat. So when eating large quantities of products containing gluten, it then forms a clag type substance causing problems for digestion of the foods that you are eating, making it difficult for your body to also obtain the nutrients needed.

What are the Benefits of Decreasing or Eliminating Gluten from your Diet?

Many people who find that they are gluten intolerant or sensitive may be able to tolerate small amounts of gluten without too much concern or damage. However most people will find benefits by decreasing the amount of gluten they consume. Maintain a healthy weight will be easier, you will have more energy because your body will find it easier to obtain the nutrients from the foods you are eating. Cholesterol levels may improve and you will suffer less digestive issues such as bloating, irritable bowel and stomach aches.

Pitfalls to Avoid by Decreasing or Eliminating Gluten from your Diet!

It is still best to avoid processed foods. So if you are eating a great deal of processed foods now that contain gluten, it is not necessarily good to replace these with the gluten free variety. By this I mean things like cakes, biscuits, packaged meals and processed meats.

Replace some of your gluten foods with fresh fruit for snacks, nuts such as almonds, walnuts: Replace say oats with Quinoa flakes and some of your ancient grains such as Amaranth, Buckwheat (makes great pancakes), Chia Seeds and millet. Increase your intake of vegetables to fill you especially sweet potato, pumpkin, broccoli, parsnips, swede, turnips and other dark greens such as kale.

Also include healthy protein such as the seeds mentioned, organic chicken, lean meat, eggs and fish. Keeping the meal portion size of chicken and lean meat to that of the size of the palm of your hand.

Please Note: Oats are naturally a gluten-free food but what makes them off limits to some people is not only the way they are processed, but something called avenin, which those who need to be gluten free can actually be allergic to.  If you do not have this issue just make sure you buy gluten free certified.

If you want to obtain Optimal Health support you may also like to consider eliminating dairy, salt and sugar from your diet. With the exception of organic yogurt and cottage cheese if you aren’t lactose intolerant.

Learn more about the Food to Eat & Why with Easy to follow Recipes in – my eBook: Eating to Live

Previous Post: « Amazing Health Benefits – The Magic of Sleeping on the Left Side
Next Post: Are You Allergic to Sulfur? Allergies to Sulfur, Sulfites, Sulfur & Sulfates! »