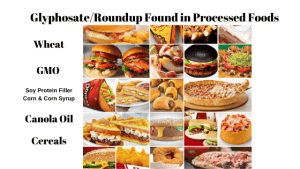 Are You Eating Roundup? Glyphosate (Roundup) Found in Processed Foods!

Are You Eating Round up [Glyphosate]? If your diet consists mainly of packaged and processed foods the chances are that you are “Eating” Round-up. Slowly “Killing” yourself with the “Toxic Poison”.

Research is showing evidence of glyphosate residues, found in a majority of processed foods in the Western diet courtesy of Genetically Engineered foods. Glyphosate has been found to be used in the farming of root vegetables such as potato, beetroot, also has been used in the growing of corn and soy.

What Glyphosate/Round-up is Doing to your Body

What happens is that Glyphosate enhances the damaging effects of other food borne chemical residues and toxins in the environment. The combination of these chemicals and toxins disrupts the normal bodily functions and therefore allow for disease to take hold within the body.

There is growing scientific evidence that GE crops are harmful to biodiversity and the environment. Furthermore, once GE crops are released into the environment they cannot be recalled. As living organisms they can reproduce and pollute indefinitely.

If your Diet consists mainly of Processed, Packaged & Fast Foods. Then you are Eating Glyphosate! 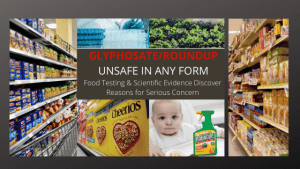 Your next question is what are processed foods?

When talking about processed foods, it is not just about microwave meals and other precooked, ready to go meals. The term ‘processed food’ is applied to any food that has been altered from its natural state in various forms. This can be either for convenience or to preserve the food, as it is not going to be eaten in the short term.

Than if you were to cook food from scratch, when you cook your food from scratch and fresh products and ingredients you are able to firstly manage what goes into the meal and the healthier alternatives instead of fat for example olive oil, coconut oil etc.

However there is a word of caution here that sometimes even when cooking your own food from scratch at home, you may at times use processed ingredients. This is where it is vitally important to read labels, to purchase for example organic, and in a jar, not in a can.

What Foods are Considered Processed?

The majority of foods bought in a supermarket will have been processed in some way.

Some of these processed foods include:

Not all Processed Foods are Bad for You

It is almost impossible living in the 21st Century to avoid all processed foods, so let’s take a look at processed foods that are a good choice and those that you need to avoid.

Foods such as milk need processing for safety reasons, pasteurising is necessary to remove harmful bacteria. Other processing such as pressing seeds to make oil, fermentation of foods as a way of variety, giving you additional health benefits as improving your digestion. Freezing fruit and vegetables preserves the majority of vitamins, however not the same vitamin value as the fresh counterparts. If choosing preserved foods  choose those without added salt or sugar.

Fermented foods are a hot topic these days with additional health benefits from improved immune function, digestion and prevention of disease. The main key found with the health benefits of fermented foods is their contribution of live microbes – these being good microbes/bacteria to support healthy digestion in your gut. Combined they are known as microbiome. These microbes exert powerful effects on your body: When these microbes have been disrupted this has been linked with intestinal and bowel conditions such as ulcerative colitis and irritable bowel syndrome, immune disorders such as allergies and diabetes, and metabolism and metabolic diseases and obesity. These all have a link with mental health problems.

Foods such as Organic plain Yoghurt and Sauerkraut to Kefir, Kimchi and Kombucha. Also include these foods – Olives, Olive Oil, Miso, Tempeh, Vinegar and small quantities of Soy sauce. Many of these now you can opt for either the ‘No Added Salt’ or Reduced Salt

Fermented foods in general should be approximately 10% of your daily food intake, these being taken prominently form the previous paragraph.

These foods I would say to eat in moderation, or you do not need to include them at all. Foods such as salami, metwurst, coffee, chocolate (dark, 85% Cocoa), tea, sour dough, wine, beer and some cheeses.

Processed Foods that you Should Never Eat & Why!

Bacon contains high levels of sodium: High levels of sodium are linked high blood pressure and heart disease. However this is only the tip of the iceberg. One of the reasons that bacon taste so good, is that it is full of saturated fat. Saturated fat another direct link to heart disease and obesity. The other danger with bacon and also other processed cold meats is the amount of preservatives in these products. These preservatives are linked to many health concerns such as ADD, ADHD, Headaches, Lack of Concentration and Cancer.

They may make claims of being healthy but are loaded with sugar and simple carbohydrates. They digest quickly and don’t satisfy your hunger for long.

A packet of instant noodles can contain nearly 2,000 milligrams (mg) of sodium, which is 500 mg more than the daily recommended intake. That increases blood pressure, that can lead to a stroke. Yes even young people can suffer a stroke. Simple carbohydrates make up the majority of the other ingredients, not to mention that these noodles have absolutely no nutritional value. You may also like to check out the quantity of saturated fat in these noodles. It is extremely high.

This may certainly seem a preferable choice to satisfy your sweet tooth. However remember that they are high in sugar and sugar has a detrimental effect on your circulation, making your blood sticky: Sugar has a negative affect on brain function as well as being a major contributor to weight gain.

No matter whether they are maple-flavoured, soy sauce- or wasabi-dusted, coated in toffee.  Flavoured nuts are packed with added salt and sugar. As we have mentioned both of these having a detrimental affect on your health. Leading to unnecessary  weight gain, diabetes, heart problems and high blood pressure.

These are an enemy to both your teeth, blood flow and waistline.  Fruit snacks may be the most inaccurate labelled food. The majority of these snacks are high in fructose that of corn syrup and cane sugar. Once again leading to health problems of weight gain, diabetes, circulatory and heart problems. Because of the high sugar content and gelatinous ingredients they stick to your teeth, providing an ideal environment for bacteria to create cavities.

Many years ago, margarine was considered a healthy alternative to butter. The truth, however is that margarine contains a large quantity of trans fats, as well as saturated fats and is now considered a great deal unhealthy compared to butter.

Trans fats are responsible for the increase of bad cholesterol, this leading to heart disease and stroke. There is also some concern as to a link between trans fatty acids and cancer. It has been noted that with cancer patients who have eliminated trans and saturated fats from their diet that there has been a higher survival rate.

Popcorn is a great as a snack food when cooked in the traditional sense in a saucepan with a little olive oil and from non processed popcorn. Then for flavour adding just some coconut oil and going easy on the salt if at all. However what is bad about microwave popcorn is in the bag. Perfluoroalkyls are just one class of chemical found in microwave popcorn bags.

Studies have been found to link perfluoroalkyls with health problems as diverse as kidney disease and poor semen quality.

Due to the processing a major part of the nutritional value of these meals have been lost. Not to mention once again the often high fat, salt and sugar in some cases additions to these foods. So apart from the poor nutritional value you also have the additional health problems once again.

Are loaded once again with salt, fat and sugar as well as having minimal nutritional value. When you see the ingredients on the packet and level of nutrition this is not natural nutrition that is found directly from fresh produce.

11. Packet Biscuits, Cakes and Many Breads

Once again often loaded with saturated fats, high in sugar and salt. Leading to health problems as mentioned heart, circulation, diabetes as well as malnutrition and obesity.

One of the things I would like to point out, is that when it comes to food and your diet it is important to include foods that are going to be supportive to your body and to have health benefits, not to cause your body harm. Your food that you include everyday in your diet is what will either be your Best Friend or your Worst Enemy depending on the choices you make.

The majority of your daily food intake should be that of fresh, unprocessed foods such as organic meat, chicken, turkey, wild caught only fish, fruit, vegetables, nuts and seeds. This is using food as your medicine for optimal health.

“Fresh is Best for Optimal Health and Vitality”

Read Next: Important Facts about Processed Foods: The Good and the Bad!

Learn more about the Foods to Eat & Why with Easy to Follow Recipes with Julie’s eBook: Eating to Live