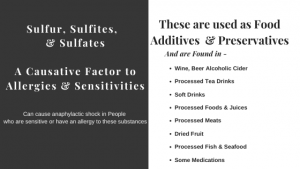 Are You Allergic to Sulfur? Learn more about Allergies to Sulfur, Sulfites, Sulfur & Sulfates!

Do you suffer from allergies and sensitivities, then chances are that you have an allergy to Sulfur, Sulfites and Sulfates. There is quite a lot of confusion when it comes to the various forms of Sulfur. What is the difference between sulfa drugs, sulfites, sulfates and sulfur, can help you to identify more effectively your allergy concerns.

People find that they are allergic to sulfa drugs and sulfites. Therefore it may be necessary to avoid sulfates and sulfur, as well. In this article I will explain to you the differences between these four substances and the allergic reactions to be aware of.

It is not unusual for people to have Allergies to sulfa containing drugs. Sulfa drugs actually contain a molecule called sulfonamide.

The sulfonamide drugs were the first antimicrobial drugs (antibiotics) These molecules plug up the bacteria’s ability to reproduce. The allergic reactions occur due to the actions of the molecule, not the actual sulfur. It is therefore this molecule having an adverse reaction to the bacteria, that has a negative effect on the digestive and immune systems. Even though sulfa containing drugs, Sulfonamides contain Sulfur. Sulfur doesn’t seem to be the problem.

Sulfites are naturally occurring sulfur containing molecules that occur in the fermentation process. The red wines.

Sulfites are added  as preservatives by wine manufacturers. The quantity of sulfites is greater in red or sweet tasting wines than that of clearer dryer wines such as white wines. Sulfites contain one Sulfur atom surrounded by either 2 or 3 Oxygen atoms. Sulfites can cause sensitivity reactions in some people to include possibly headaches and breathing problems. Sulfites are not the same as Sulfa Drugs.

Sulfates contain one sulfur atom surrounded by 4 Oxygen atoms. Salts, acid derivatives, and peroxides of sulfate are widely used in industry. Sulfates  also occur widely in everyday life. Sulfates are salts of sulfuric acid and many are prepared from that acid.  Sulfates are very important molecules for everyone’s health and do not cause allergic or sensitivity reactions.

Sulfur is the chemical element that is found in Sulfa Drugs, Sulfites, and Sulfates. Sulfur is an essential element of life and is found in amino acids and other important molecules in the body. It is virtually impossible to have an allergy to sulfur itself. As you are not able to survive without sulfur. So what happens is that people don’t actually have an allergy to sulfur, they are actually allergic to the sulfites or sulfonamides. Not to the sulfur or sulfates.

Allergy Symptoms to Sulfites or Sulfonamides

There are rare cases of serum type sickness reactions that occasionally occur say  10 days after a sulfa drug treatment begins.

These Symptoms can  include:

You should contact a Health Professional immediately if you have these symptoms.

Medications to Avoid if you’re allergic or have a sensitivity to sulfites or sulfonamides:

Not all drugs that contain sulfonamides cause reactions in all people.

Some medications that may not cause these reactions are:

Symptoms of an allergic reaction to sulfites include:

How to Avoid Sulfites

Whether or not you find that you have a life/death allergic reaction or just some of the symptoms associated with a sulfite allergy. It is beneficial for you to avoid them as much as possible.

Sulfites are common in processed foods, condiments, and alcoholic beverages, such as red and white wine. Sulfites occur naturally in wine during fermentation, and many winemakers add them to help the process along. For the past two decades, the Food and Drug Administration has required winemakers to display the warning “contains sulfites” if levels exceed a certain threshold. Many companies voluntarily add the label to their products as well.

If you find that you suffer from any of the mentioned sensitivities. It is then important that you should avoid food products with the following chemicals on the label:

Important to Note: In this article I am not talking about the  Naturally occurring sulfites found in fresh fruits and vegetables.  But the addition of chemically derived sulfites added to processed foods, drinks and medications.

I hope that you have found this information helpful, as I often mention, allow Fresh, Organic Foods to make up the majority of your daily intake of food intake you will then reduce the amount of these harmful sulfites entering your body.

The increased consumption of processed, packaged and fast foods has escalated the increase in allergy problems. Learning how to minimize and eliminate many of these from your daily diet and living habits will help keep your allergies at bay.

Read Next: Important Facts about Processed and Packaged Foods: The Good and the Bad!

Master a Life of Optimal Health, Happiness & Vitality is in essence is about providing you with a trusted and guided path to support you with understanding the concepts and changes necessary for taking charge of your health and ultimately your life. By Becoming a Community Member this is a Great Way to Get Started!